It’s no easy feat! Out of 92 members participating in the challenge coming 2nd place is a big deal.

Iain has been on our 2 a week membership for over two years.

Iain made the commitment to quit alcohol during May, and stayed away from carbs and reduced his portion sizes. His goal for Megaformer was to bring down his metabolic age and reduce visceral fat… and guess what? He achieved it.

He lost a whopping 6kg and 10cm off his measurements. This won him a 3 a week membership for 4 weeks.

We caught up with Iain to see how he did it.

Congrats on achieving Runner-up for Megaformer Challenge 2019! You did so well! How does it feel?

Was it easier or harder than you expected?

This was my third Megaformer challenge so I had a pretty good idea what was going to happen.

What changes have you noticed in your body?

Well, I’m definitely less fat, other than that… I feel a bit stronger in general.

You quit drinking during the Challenge. How did that go? Do you think it helped you achieve your end result?

I’ve done a few dry months before, but never during Megaformer Challenge. That was another reason why I went dry during this one, I wanted to see what would happen with the results compared to the previous ones I've done. I think not drinking booze during the challenge reduced my calorie intake by huge amounts. Not only the drinks, but the copious amounts of shit food I’d eat after the drinks. Waking up without a hangover and feeling fresher also helped with the early morning classes for sure. You can push yourself a bit more when you’re not hanging.

How was your mindset during the challenge?

Yeah, pretty good. I’m pretty stubborn. If I say I’m going to do something, 99% of the time I see it out!

What do you love about the working out on the Megaformer and training at LA Fit Studio?

I love that it doesn’t get easier no matter how often you do it. I like that’s its low/zero impact and strength building. It feels like it’s doing my body good and not causing long term damage. The staff are fantastic and make you feel welcome. It’s a proper family/neighbourhood feel. And I love it’s just around the corner from my house!

What did this experience teach you?

Not drinking is pretty boring. But you're definitely more productive. I guess it’s all about the balance. So now I try and drink low carb beers or tequila, soda and lime. Basically drinking healthy!

Listen to your instructor. Go as slowly as you possibly can. Ohhhh and breathe! That's the most important! 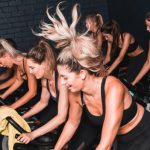