Congratulations to our member Edwina Cheong who made it to Club 500!

Edwina has been training at LA Fit for over three years. During her time in the studio, she has won two Ride Challenges, one in 2017 and one last year. In last year’s challenge, Edwina completed a jaw-dropping 35 Ride classes and 1 combo class. Not to mention 18 Megaformer classes. She won a trip to Camaya Bali for her amazing effort.

As you can see, Edwina’s one determined gal. She is a self-confessed Megaformer addict, and now the slow burn of Mega is just another part of her routine.

We chat to Edwina about her love for Megaformer and what it’s like to now be in Club 500!

Congratulations on joining the 500 Club! What an achievement – it’s no easy feat. How do you feel?

It’s kinda hard to believe actually. LA Fit has become such a part of my life now that I don’t think about class numbers. It’s just a part of my usual routine, so its weird to put a figure on my LA Fit journey like this. Here’s to another 500, 1000, and beyond!

Tell us all about your LA Fit journey. Why did you join? What was it like in the beginning? And how has your fitness improved after 500 classes?

I joined in May 2016 as part of the Megaformer Challenge. I was doing another boutique fitness class but after 2 years, I was no longer getting anything out of it so was looking for a new addiction. Mega May was a perfect jumpstart because the commitment to do a Megaformer class every second day meant I didn’t really get a chance to overthink it. It was hard that first month (especially since my timetable mainly consisted of Zac and Jacinta’s classes!) but once I started, I was hooked. And now, whenever I suspend my membership to go on holiday, I am always itching to get back into it ASAP! Especially since any sort of break means I really feel the pain in muscles I didn’t even know exist after that first class back!

What do you enjoy about being a part of the LA Fit community?

As cliche as it sounds, that hashtag #fitfam really rings true with LA Fit. From the girls (and guy) on the desk, to the instructors, and the members that I have become friends with, they all make this journey what it is. It’s more than just coming into a studio and smashing out a class – it’s the chats before and after class, the post-class coffee and brunch dates, the inside jokes and talks about food – it’s why after more than 3 years, I still haven’t left LA Fit.

If you had to use three words to describe LA Fit, what would they be?
Sweat, shake, burn!

Seeing as you’ve completed over 600 classes (that’s a hell of a lot), can you share a secret (or three) on staying motivated and consistent with your training?

It’s not really a secret. The amazing instructors are the ones that keep me coming back. Time after time, their enthusiasm, passion, and jokes motivate me to drag myself out of bed at 6am and/or drag myself in after a 10-hour work day, or hop on a train and a bus to get in on a weekend!

Such kind words. Thank you, Edwina!

Have you been to Megaformer lately? We would love to see you. Book a class. 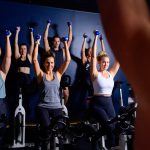